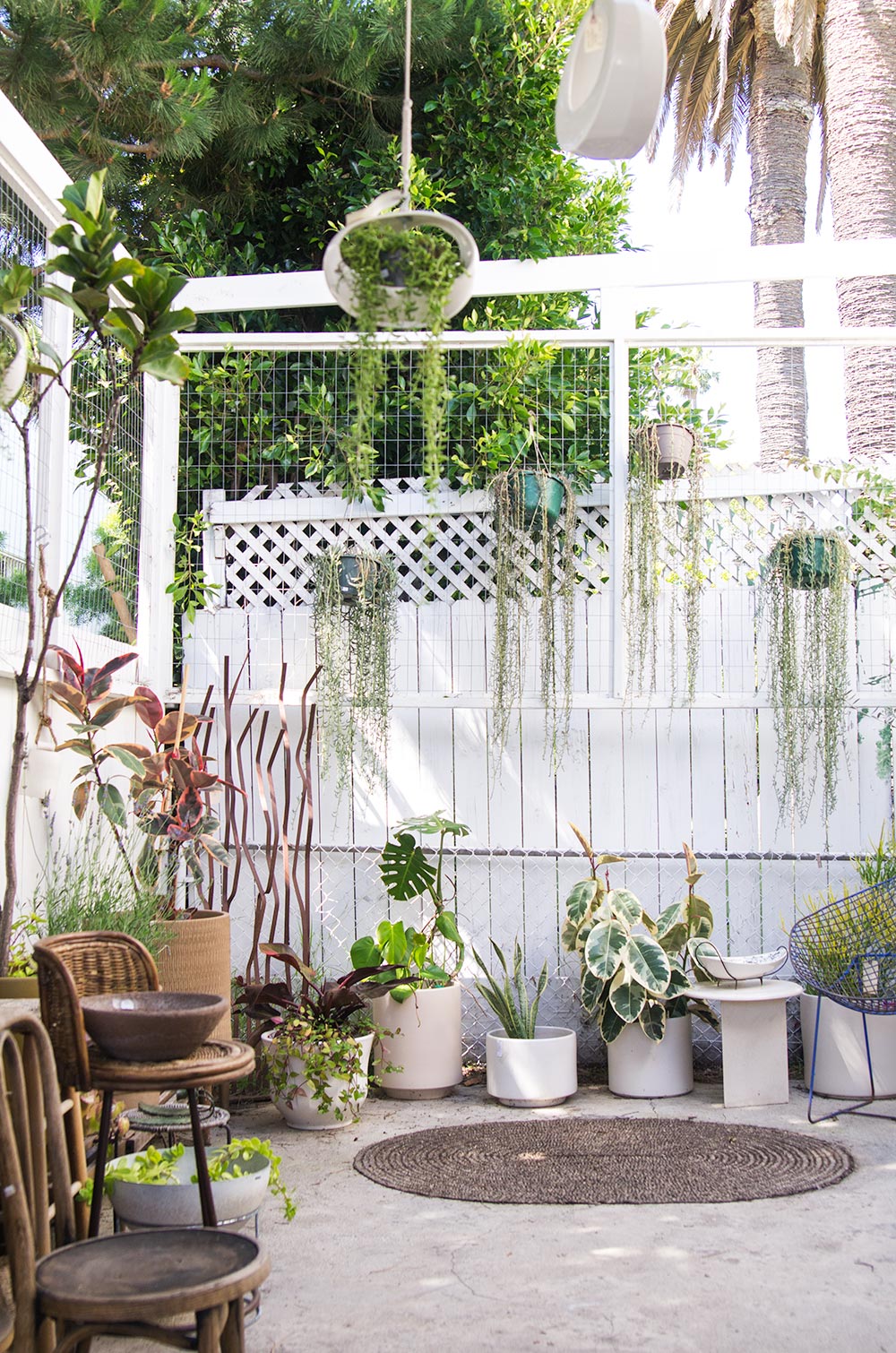 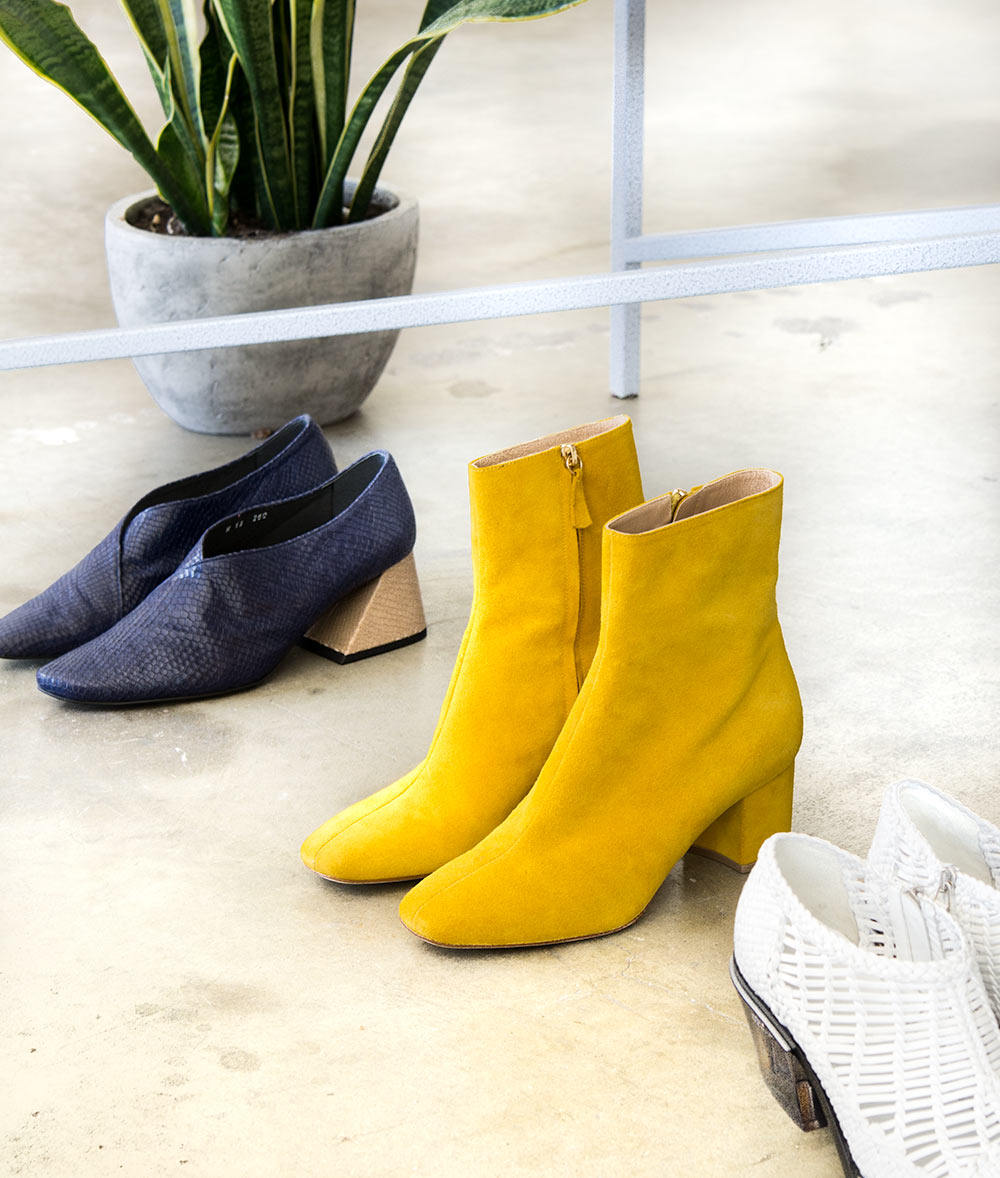 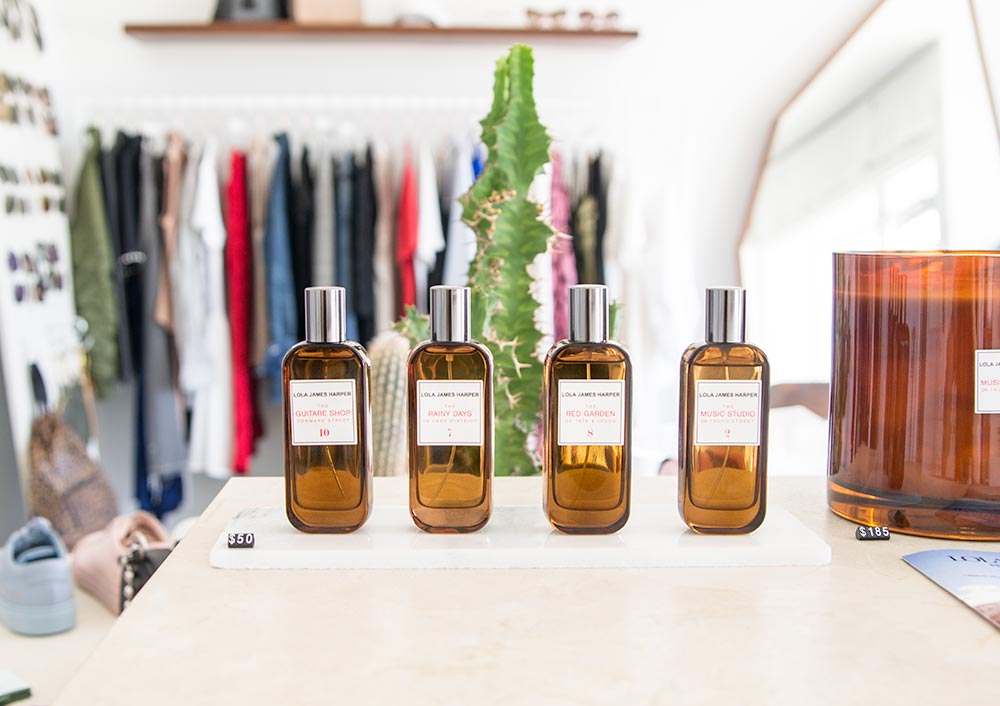 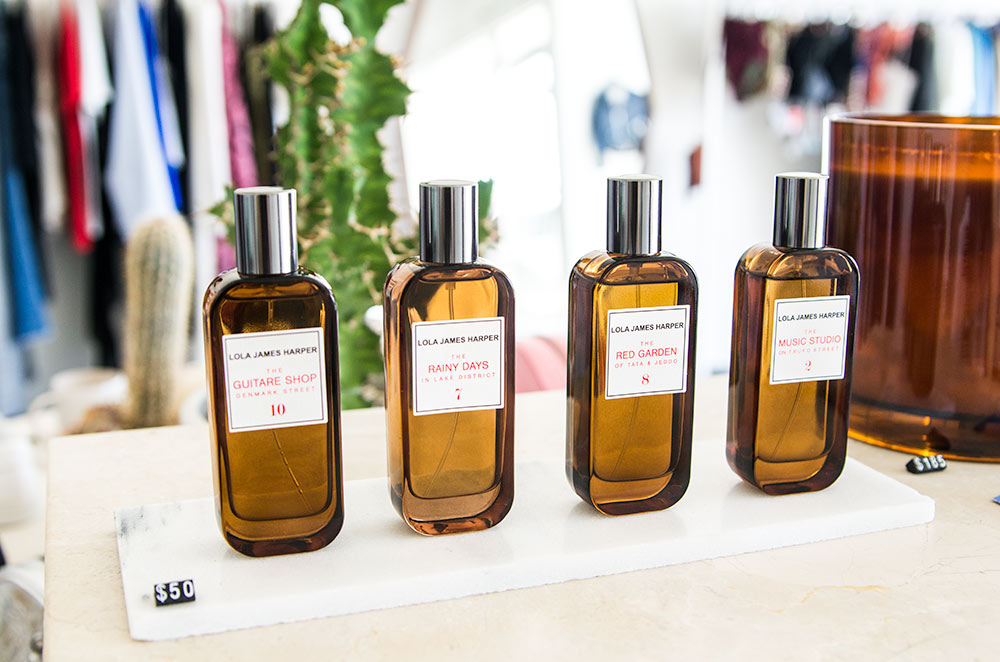 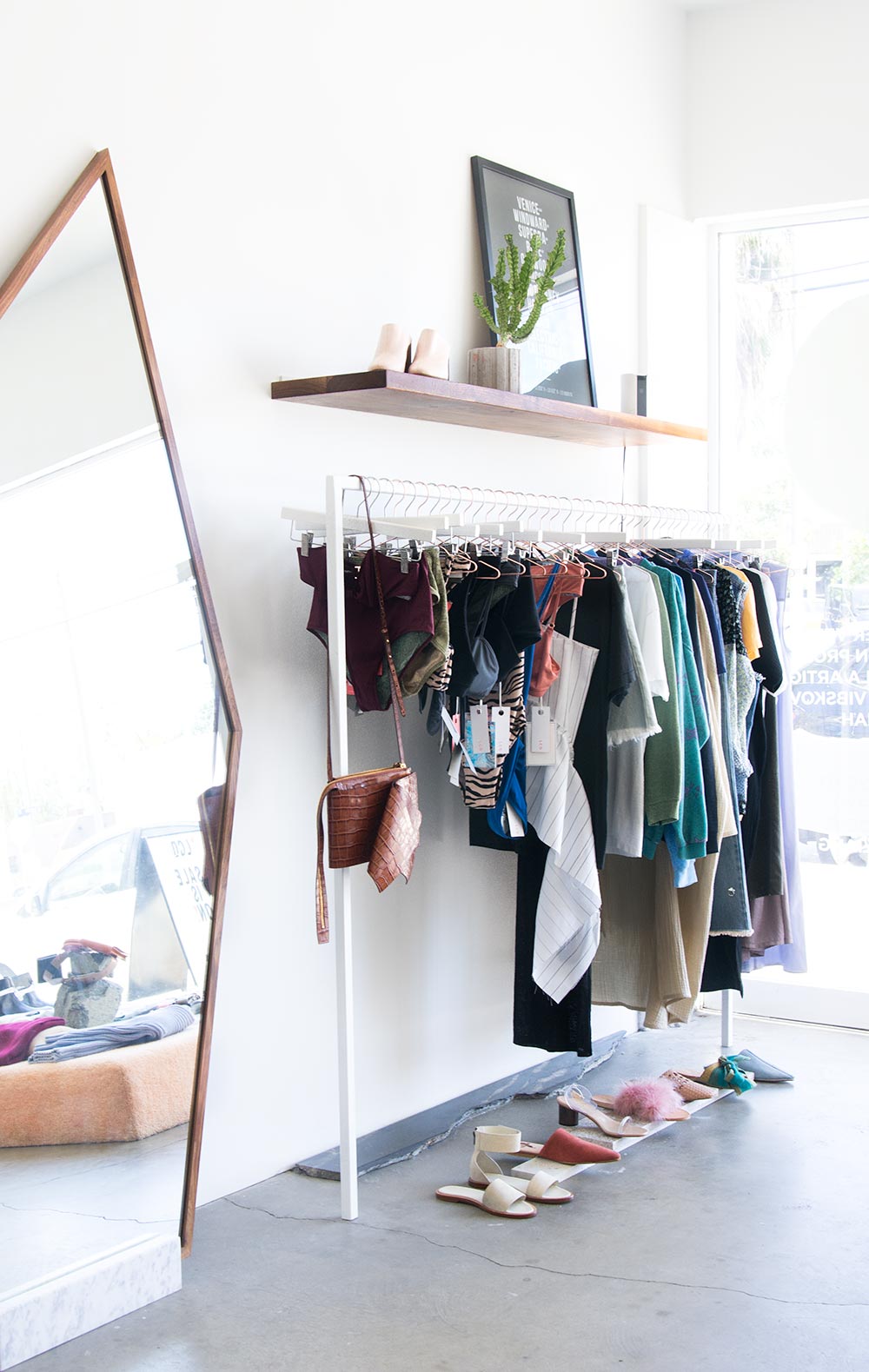 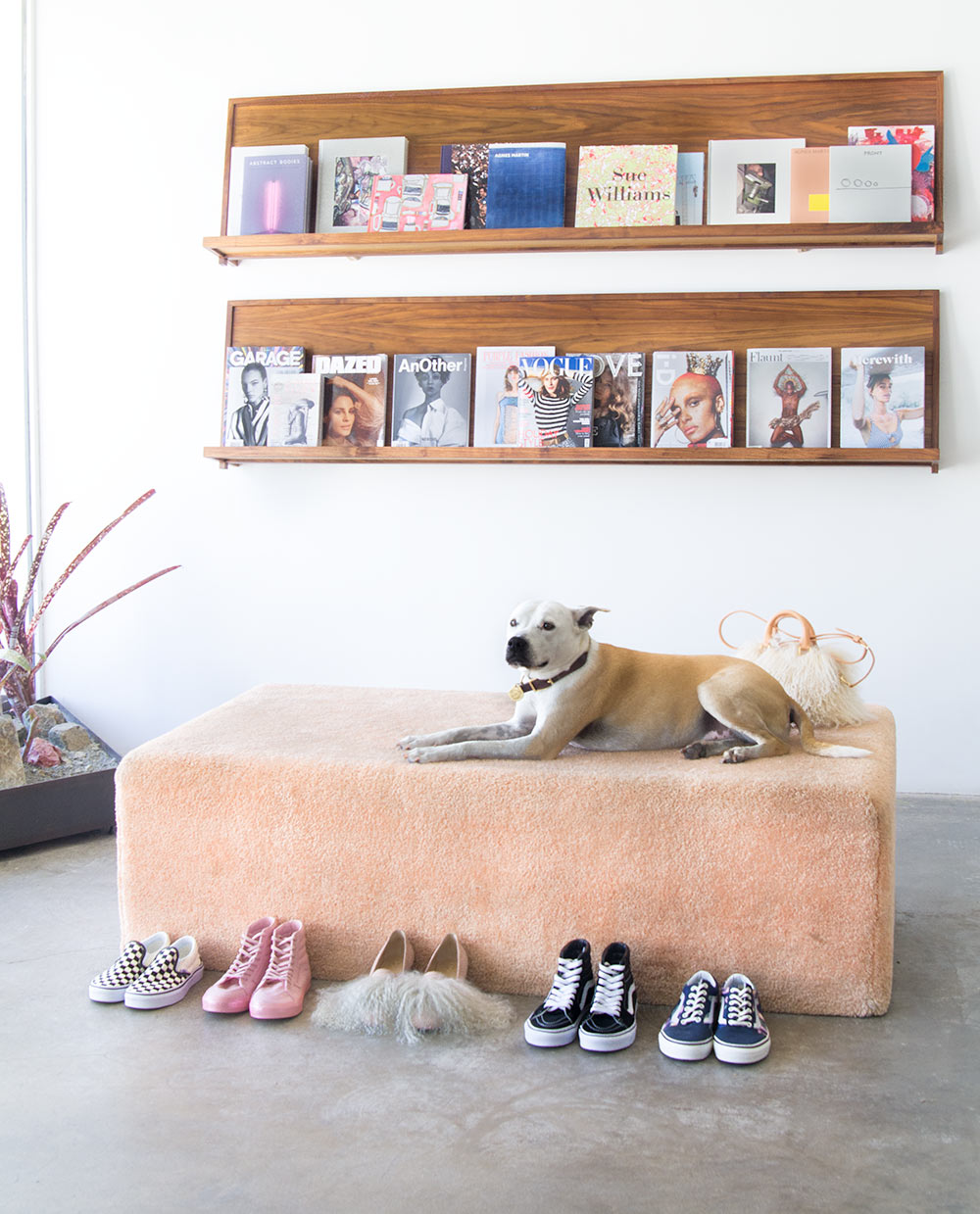 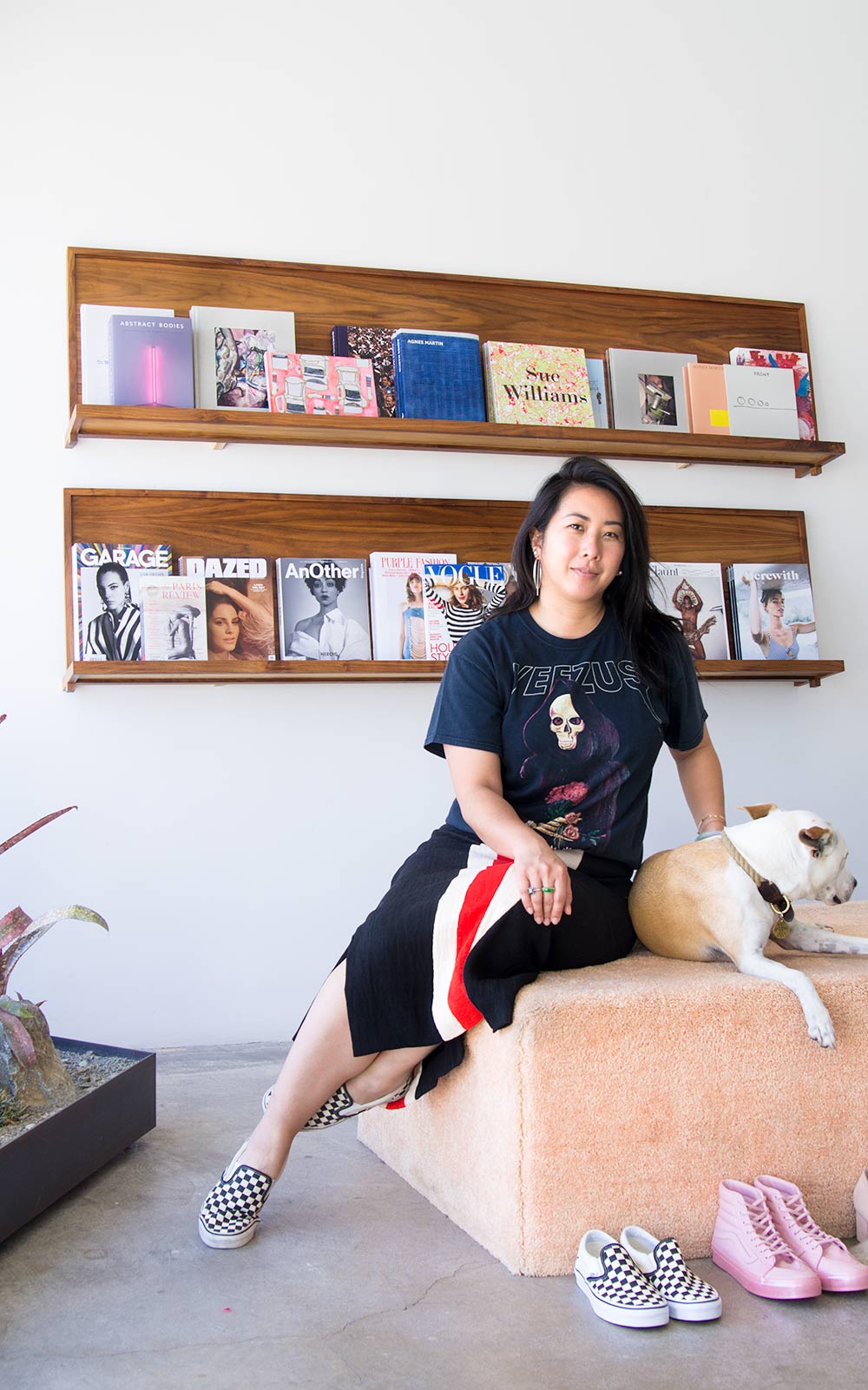 I sat down with, Geraldine Chung, founder of women’s wear shop, LCD, to chat about her story: A self described “tech nerd” who found her way into fashion after leaving a ten year stint in New York City, and now owns the coolest clothing boutique in Venice. Read on for where her fashion inspiration comes from, emerging female-run brands to know, and what’s next for Geraldine and LCD.

Scampering along Lincoln Blvd beneath hat, face visor, and sun scarf yesterday morning looking like Daft Punk wearing a Birka – yes, I take sun protection seriously –  I rushed to escape LA’s blinding rays and to meet women’s wear shop, LCD, founder, Geraldine Chung. Expecting me as I walked into the store, she momentarily greeted me with a handshake and hello before returning to fervently straighten racks of clothes and fold merchandise in preparation for our interview and photoshoot.

Her pleasantries felt standoffish and I immediately picked up on a familiar edge to her style and demeanor; one I’ve seen and felt before on the streets of New York City where personality juxtapositions, embraced and nurtured eccentricities, and grit find their way into fashion choices and attitudes that seem to say, “This is me. I don’t give a s*&^ what you think, and I love what I’m wearing whether you like it or not, so appreciate it or keep it moving.” Her mix of vintage streetwear – faded Yeezus t-shirt, checkered slip on Vans, graphic knit skirt – and lone oversized earring and hardened shell made me instantly like her and long for the city.

For some, a hard exterior is deterring, but after living in New York for almost six years, I strangely find it endearing. It signifies there’s someone softer, kinder, and warmer underneath whom the outer armor is meant to protect. This is exactly what I found during my interview with Geraldine – who self deprecatingly described herself throughout our interview as a “tech nerd,” “shoe lover,” “middle child without middle child syndrome” and “the black sheep of the family.”

We sat on a peach carpeted bench positioned near a rack of magazines, I imagine was strategically placed for sullen boyfriends or husbands dragged along shopping, with her Pitbull rescue, Izzy, between us, and with a little provoking she candidly peeled away each layer revealing her story: First, growing up in Orange County until she was six with her mother, older brother and younger sister while her father lived abroad running a manufacturing business in Taiwan; moving to Taipei for 1st-12th grade and hating every minute of American Taipei School, which she described as more academically rigorous than her undergraduate years at Stanford, and a place she never felt like she fit in; working in tech in SF and then as the senior digital director at Atlantic Records in New York in the “nerd department,” she recalled affectionately; falling passionately down a deep rabbit hole into fashion with the guidance of friends in the industry; and finally, how a self-proclaimed New Yorker found herself moving cross-country to live in a city that can only be described as its antithesis. “I moved here for a boy. It didn’t work out, but I decided to stay since all of my extended family is here. I always envisioned I would end up living here, but the whole situation with the boy just hastened me eventually living here. I wasn’t 100% ready to leave New York, but everyone keeps telling me the universe has a plan, so I’m just waiting for whatever that is.”

Freelance work designing websites kept her afloat initially, but shortly after the move in 2012 Geraldine launched Lust, Covet, Desire; an online fashion website that would later mature into LCD. “The idea was to sell things that you lusted for, craved and desired. It was supposed to be a high-low mix of premium streetwear meets high-end designer.” But with no previous experience in fashion and limited fashion connections, she found her plan difficult to execute, eventually pivoting to emerging, independent designers, like Brother Vellies, Ryan Roche, Gabriela Artigas and Sandy Liang.

The pivot turned out to be a successful one. After four years online, she launched her first brick-and-mortar store a little over a year ago and has another slated to open in downtown LA next year in David Fishbein and Joseph Miller’s second ambitious urban development, Row, following the success of their trendy outdoor shopping oasis, Platform, in Culver City. She says the shop will carry more “dressed up” attire catering to the downtown crowd, but not formal.

While her success has grown quickly, it has not been without challenges, a steep learning curve and wearing multiple hats, but she says one of the best things to come out of this new venture has been learning about, befriending and supporting female owned and operated small businesses – with 90% of the designers carried at LCD being both.

But perhaps the most talked about emerging female-run brand currently carried at LCD is Brother Vellies whose founder, Aurora James, Geraldine explained, works with craftsman and tradesmen in Africa to produce all of her shoes with local or recycled resources. “A lot of big denim brands in the US throw away denim product that doesn’t sell. They don’t want to mark it down too much, so they would rather dump it. So, what Aurora James does is she goes and gets this recycled denim and turns it into shoes. She creates traditional African shoes, but she also does fashion shoes and is bridging the two worlds. The UN works with her on a lot of her manufacturing because it’s such a struggle in a lot of these countries, like Ethiopia and Kenya, where there is political turmoil.”

Brother Vellies has exploded on the scene this past year and is now sold in independent boutiques across the country and more recently, Nordstrom and Amazon. Their fox tufted Galaxy Dhara Sandals were what originally brought me to LCD, though, as they’re sold out in my size everywhere, I ended up leaving the shop a very satisfied customer with Brother Vellies’ Wallflower Clutch in Honey Mongolian as a consolation prize.

Some emerging brands like Brother Vellies make it big and help drive sales at shops like Geraldine’s LCD, but the majority in-store are widely unknown brands and can be a challenge to sell. “It’s very expensive for these independent brands to produce fashion on a small scale. Therefore, these pieces are going to be more expensive. But they’re for people who are interested in buying fashion that is sustainable, ethically-run and female-run. You have to pay a premium for buying products you believe in, but I feel like people are becoming more aware. And by creating an in-store experience where people can touch and see the clothes, it also creates an opportunity for us to have a conversation about the pieces and tell customers what makes these garments so special.”

When asked about her own fashion influences, she pauses for a moment before coming up with not a person, but a place as her biggest influencer. “Nobody in my family is that fashionable. I don’t think I’m that fashionable. I think I just really enjoy fashion and I think I have fun with it. I feel like people look at it as though there is a right way and a wrong way – and this is probably going back to living in New York for ten years, but New York is incredibly fashionable. You can wear anything. You can be a different person from day to day and nobody cares. You can just do you, and do you on that day. That was a big takeaway from my time living there and I definitely have incorporated it into how I dress.” That attitude of freedom of expression and raw city grit finds its way into the pieces populating LCD, which comes as no surprise since Geraldine is the store’s sole buyer.

As I walked around and photographed the shop, a peach and tan Perks And Mini bomber and Claudia Li architectural, off-the-shoulder white blouse caught my eye, but there are so many conversation worthy pieces housed in this concrete and white walled shop, I really couldn’t help but lust, covet and desire everything.

Be sure to check out LCD’s covetable pieces at the Venice shop or online, and keep an eye out for the downtown store launch.

Drink of choice: Whiskey Mezcal or whiskey straight up

Most prized fashion possession: A pair of five inch high Alexander McQueen Mary Jane’s shoes with the softest calf leather and stirrups that jingle when I walk.

Favorite eats: Gjusta or Felix for a special occasion