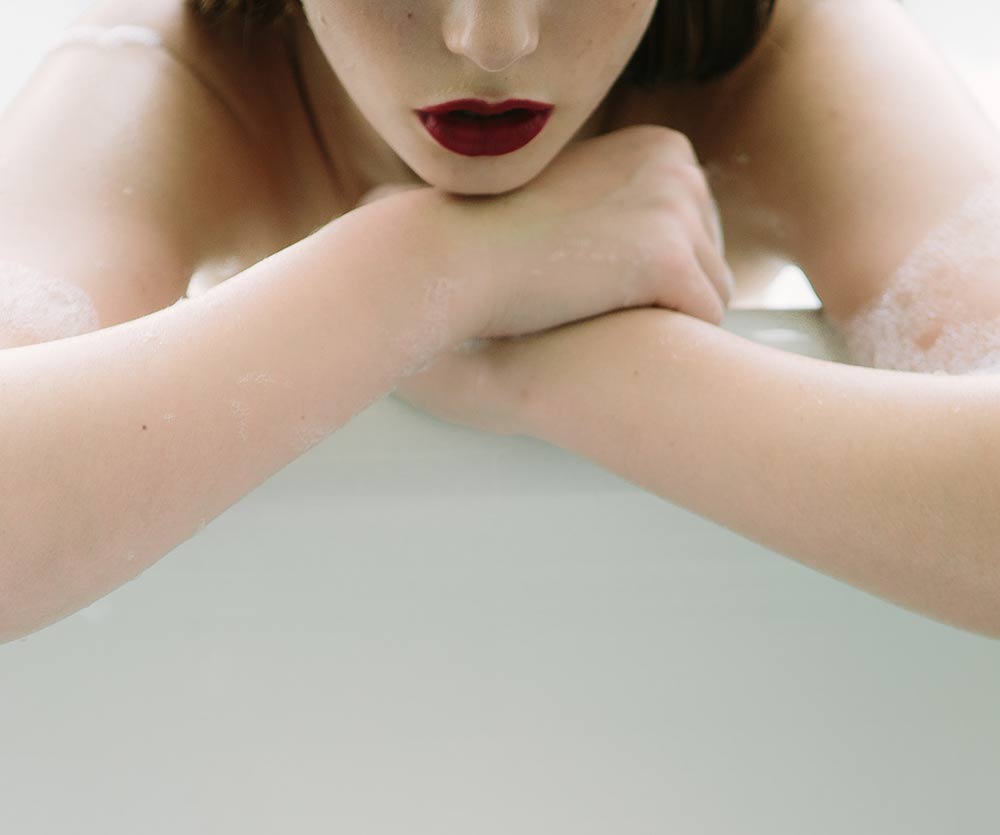 Just like the greats, Van Gogh, Monet and Picasso – each renowned makeup artist has a signature style of their own: The 90s athletic, Brooke Shields vibe comes to mind when you think of Bobbi Brown’s natural palette; sexy, smokey, with a hint of British edge and luxury screams Charlotte Tilbury; and contoured, strobed perfection is what the Patrick Tas and Ariel Tejadas of the Instagram world are serving up. But there is only one to turn to for the classics: celebrity makeup artist, Julie Hewett.

While you may be unfamiliar with the name, you have definitely seen Julie’s work in films such as Woody Allen’s Cafe Society, Ocean’s 11, American Beauty, or Pearl Harbor, to name a few.

Soft skin, enhanced beauty, and a signature red lip are her style. An aesthetic that stems from her love of old Hollywood movies and glamour inherited from her father.

“My dad was into movies,” says Julie, “He grew up right next to Paramount Studios and would stand outside with his autograph book. He loved films. We used to watch the Academy Awards together; that was our thing. I remember, when I was still in art school in New York, he bought me this book called, Four Fabulous Faces. It was this huge coffee table book with still shots in black and white of Marlene Dietrich, Joan Crawford, Gloria Swanson and Greta Garbo. That got me hooked,” says Julie.

So hooked, she once shaved off her eyebrows to look like Greta Garbo. “I’ve been paying for it ever since,” she laments and laughs. Yes, that’s true fandom, although I do vaguely remember myself plucking my eyebrows down to a pencil thin line mimicking 90s girl, Drew Barrymore. I guess, we’ve all been there…

It’s been three decades working in makeup and Julie’s resume reads like a who’s who in Hollywood, but it’s her cosmetics line and soon-to-be skincare line she hopes to take to the next level.

Classic red, deeply pigmented, long lasting lipsticks in various shades of burgundy, aubergine, and true red come with complimentary lip liners, picked out by Julie, meant to shade, enhance and define the lips as though sketching on the face.

Nudes find their way into the collection, too, but that’s it. You won’t find trendy colors here, like purple blues or grey lipsticks. (Yes, that is a trend. Why? I’m not sure either…)

Face makeup, eye shadows and liners, and a set of brushes round out Julie’s line. And her signature camellia oil is the current stand alone skincare item, and an ingredient she added to her lipsticks well before it was common practice to add skincare ingredients to makeup.

“When I was making the lipsticks back in the early 2000s, I told the manufacturers I wanted them to add camellia oil to them. It’s such a miracle oil. I first learned about it when I was on the set of Pearl Harbor in Hawaii. One of the actresses had the most amazing skin. She told me she was using camellia oil. I ended up buying some for my friends and they loved it. It’s the real deal. I always keep it in my kit,” she says.

As our interview wound down, I had to ask the famous makeup artist… how does one pick out the perfect red lipstick and make it last?

“There are no rules,” Julie explains, “You have to try on and see what you like, but there are general guidelines.”

For everyone
“I tend to go for a true technicolor red, not blue, for warmer skin tones. I have a red called, Rouge Noir, that’s universal; anyone can wear it. My aunt Betty wears it and she’s 90 years old, and my makeup artist friend who is African American wears it and they both look fantastic in that color. I also have a new red lipstick called, Michelle, that I made for Michelle Monaghan that is one of those universal reds. It’s on the plum side and can be applied like a stain.”

For warm skin tones
“Belle Noir is a coral red that looks great on people with warmth to their skin.”

For dark skin tones
“Sin is an aubergine red that looks amazing on African American or Latin skin tones, or if you have fair skin and you want to go for a dramatic look. And same with Coco; it’s a brown red that is great for anybody, but is very dramatic.”

For red lipstick beginners
“My lipsticks, Gem and Luna, are shy reds. They’re starter reds that look like red stains and can be topped with a gloss. They’re for people who don’t want that deep pigmented red look.”

And to make it last…
“My lipsticks are so pigmented. I tell people to put a little concealer on the lips and blot it,  then apply the lipstick and a little liner afterwards. Lastly, powder around the mouth. My lipsticks are moisturizing, matte and long lasting. You can eat a meal and they will still be on perfectly. They’re a fantastic, high quality, highly pigmented product.”

“As you can see I’ve taken red lipstick very seriously,” she says with a laugh.